Penny has lived in Portsmouth all her life. She was educated at Oaklands Comprehensive School and sixth form. Her mother was a special needs teacher at schools in Purbrook before she died of breast cancer when Penny was fifteen years old. Penny’s stepmother was also a teacher at a local primary school. Her father was born in Hilsea barracks and served in the Parachute Regiment. He later became a teacher at Oak Park school and a youth worker for Hampshire Council.

Penny was the first of the family to go to university, where she studied Philosophy at Reading. She paid her way with several jobs, working by day at local factories, including the Johnson and Johnson factory, and by night, as a magician’s assistant for Will Ayling, President of the Magic Circle.

She went on to have a successful career in communications in the private, public and charitable sectors. During the blockades in France, she supported British truckers while working for the Freight Transport Association. She later became a director of one of the best performing local authorities in the UK. This delivered excellent services for one of the lowest council taxes in the country.

She was a director of a national lottery distributor and created the Veterans Reunited programme, enabling servicemen and women to attend commemorative events and visit wartime battlefields. In 2004, she set up her own business which she sold before becoming Director of Diabetes UK, the largest patient organisation in Europe. She expanded its services into countries prone to diabetes while growing its income. 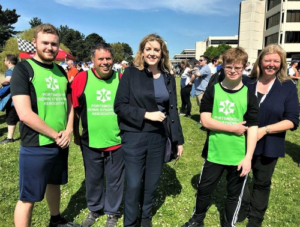 She has a long history as a volunteer firstly with the hospitals and orphanages of post-revolutionary Romania. Her interest in hospitals continued when she ran the League of Friends visitors at the Queen Alexandra Hospital. She remains a patron of Enable Ability, a Trustee of the Wymering Manor Trust, a Scouting Ambassador for Portsmouth and a Royal Navy reservist at King Alfred on Whale Island.

She lost Portsmouth North at her first attempt in 2005. She went on to win the seat in 2010, 2015, 2017 and 2019, each time with an increased majority. In 2014, Penny joined the government as a Minister in Local Government. In 2015 she was made the Minister for Armed Forces, the first woman to hold this position. In 2016, she was appointed as Minister of State for Disabled People, Health and Work. In November 2017, she was promoted again into her first cabinet position as Secretary of State for International Development and subsequently became Secretary of State for Defence, again the first woman to hold the post.

In 2020, Penny returned to government and was appointed to the role of Her Majesty’s Paymaster General. In September 2021, Penny was appointed Minister for International Trade Policy.

Find out about the Parliamentary career of Penny Mordaunt, including posts and roles held.

Review the House of Commons voting record of Penny Mordaunt.

Review the last election result for the constituency Portsmouth North when Penny Mordaunt was elected.