BRITAIN must give Ukraine ‘unlimited support to defend itself’ against Russia’s ‘monstrous’ invasion, former defence secretary Penny Mordaunt has insisted.

The Portsmouth North MP launched a scathing broadside against the Russian leader after he signed off on a military assault of Ukraine following weeks of simmering tensions.

It comes as The News can today reveal that efforts to help evacuate families of Ukrainian citizens already living in Portsmouth are now underway.

Speaking to exclusively to The News, trade minister Ms Mordaunt – who has been vehement critic of Vladimir Putin – said Britain must answer the Russian premier’s action ‘with a devastating response’.

‘Putin’s actions are monstrous,’ the Conservative minister said. ‘We should remember that the West’s military superiority over Russia is absolute.

‘We should give Ukraine unlimited support to defend itself. It is in our own interests to do this.

‘Our own armed forces are providing support within these parameters and of course that includes many from Portsmouth. 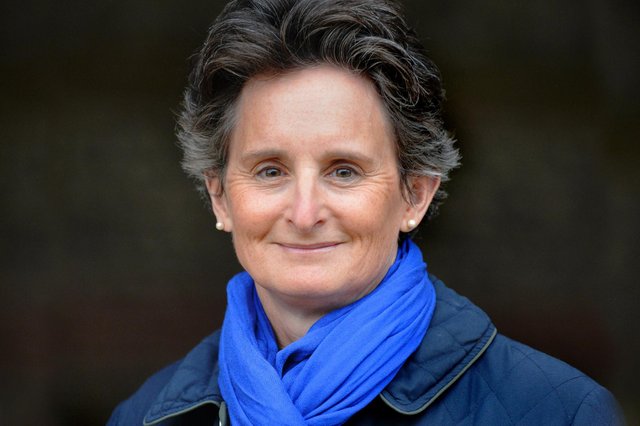 ‘Russian aggression has to be stopped and Putin’s actions will have galvanised Nato and others – precisely what he did not want.’

She added: ‘This is the most serious situation. We should answer Putin’s actions with a devastating response.’

In Portsmouth, support to Ukrainian citizens living in the city has already been offered, Ms Mordaunt today added.

The city MP said that her team had been working on trying to secure visas to help evacuate Ukrainian spouses of foreign nationals already living the area.

‘My team and I have been helping UK nationals from Portsmouth and their families in Ukraine and continue to do so,’ Ms Mordaunt said. ‘Our main efforts have been in trying to secure visas for their spouses be children.’

Earlier this week, Ms Mordaunt said that any invasion by Russian forces would be an ‘appalling act’ and that Britain would support Ukraine.

Britain has already sent military supplies to Ukraine, with Boris Johnson having already signed off on a further tranche of ‘defensive’ weaponry to be sent to Ukraine.

The government has already warned British citizens living in Ukraine to leave the country ‘immediately’, with support being offered.

Flick Drummond, MP for Meon Valley, added: The invasion of Ukraine by Russia today has left a dark stain on our continent and it must be countered by the international community, by Nato and by all nations who believe in democracy and the rule of law.

‘My thoughts are with all Ukrainians who are facing the terror of invasion and bloodshed. They are a democracy whose only crime is to seek a different path than Putin wants. They are fighting for their existence bravely and I cannot express how proud and supportive the world is right now of their battle.

‘This land grab, this reckless imperialism is totally unacceptable and I welcome the Prime Minister’s statement in the House of Commons today outlining severe sanctions against Russia, Putin and his cronies.

‘There is no doubt that with the help of the United States, European Union and other nations we will indeed squeeze Russia from the global economy and limit its ability to raise money, trade and obtain technology for its war machine.

‘Like all dictators hell-bent on expansion at the expense of sovereign states, Putin and his regime will fail.

‘I am also proud the UK has made it clear it will stand firm and look to protect other nations who might be vulnerable to Putin’s Russia whether they are in Nato or not.

‘I have confidence in the Nato alliance, the West’s joint response to this tyranny and in our ability to inflict serious economic damage on Russia.’

Dear Resident, I wanted to write to you to provide you

Disappointing though this decision is, I remain

Freedom and fairness should be at the heart of all we do.

We need your help to identify if there is public

Penny Mordaunt has held a further meeting with local

I am very concerned about the closure of North Harbour